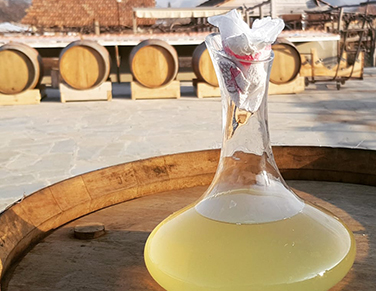 Drive west of Tbilisi for about an hour on the backroad to Gori and you will find yourself in the heart of the Shida Kartli wine region. It is an awesome expanse of plains, rolling hills, jagged ridges and hidden valleys that provide a myriad of terroirs that grow some of Georgia’s most exclusive grapes. In ancient times, these were the grapes for the wine of kings.

On a warm spring afternoon, Andro Barnovi was tying up vines to the trellises in his vineyard and nursery, four hectares of hearty, clayey soil in Tsedisi, a remote Kartli village 810 meters above sea level. Part of the Ateni wine region, Tsedisi is said to have the richest soil and best microclimate in the area.

“Unfortunately, we’ll have to chop down that walnut tree,” Barnovi said, referring to the giant beauty by the river that bordered the property. “Walnut trees are bad for grapes.”

Like all good organic winemakers, 43-year-old Barnovi understands that good wine begins by nurturing the vineyard’s biodiversity to naturally boost the grape’s immunity to pests and disease. And although a wine can have additives, including sulfites, and still technically be “organic,” Barnovi adds nothing to help or stop the fermentation process. It’s a time-honored method Georgians have been practicing for 8,000 years, longer than anybody in the world.

Yet, just because viniculture is practically embedded in their DNA doesn’t mean every Georgian who makes wine does it well. Many small vintners take shortcuts, while big companies play it safe, striving for consistency and profits.

The artisans, however, have a visceral relationship with the earth. For them, winemaking is otherworldly. You experience this affinity in their wine, a capricious juice susceptible to variations in the environment, climate conditions and to human error. A lot can go wrong, even after it is bottled, but the payoff from all the intimate work that goes into a successful vintage makes it all worth it.

“Big companies can make a good wine,” Barnovi admitted, “but they never make an outstanding one.”

Like so many Georgians, he comes from a long line of winemakers, although he took a roundabout trajectory to get to the wine cellar. Educated in the West, he has served in the country’s defense and security division since the late 1990s, becoming the deputy defense minister in 2007 and governor of Shida Kartli and head of the Presidential Administration in 2013.

Artisans have a visceral relationship with the earth. For them, winemaking is otherworldly.

But by 2015, Barnovi felt he could better serve his country with wine and leave the politics for the politicians. “I wanted to do something personal that provided long-term results,” he said, kicking the mud off his boots.

Winemaking had been riding his coattails for some time. In 2008, Barnovi started a development project for Shida Kartli’s wine and agriculture sector, but in August that year Russia invaded Georgia and occupied much of the region. The ambitious plans were shelved for the unforeseeable future. In 2013, he helped set up the Georgian Traditional Wine Association and organized wine festivals in the wine regions of Racha and Shida Kartli’s capital of Gori.

Last year, Barnovi went full steam ahead and set up a marani (wine cellar) in Tsedisi with his business partner Misha Kvitsiani, where they made their first vintage of wines under the label Tsedisi Central Cellar. They changed the name of their association to the Georgian Federation of Artisan Wine Cellars, as it better reflects what they are. Their “chateau” hosts weekly classes that currently have two dozen local winemakers learning the rudiments of organic growing, quality control, branding and marketing.

“At the festival in Racha [in 2013], we invited over 200 growers to submit their wines for tasting and testing. Only three were healthy,” Barnovi said. “That doesn’t necessarily mean good.”

In four years, the Federation has grown from zero to 20 winemakers and continues to expand. By holding classes, publishing books and organizing festivals, they have reached about 500 winemakers across the country.

“The idea is to introduce an understanding of knowledge and quality to those who have their own resources for development. Add this to our national tradition of winemaking, which is a product in demand, and you can attract more resources to develop infrastructure and make places more attractive for internal and external tourism,” he added.

The chateau is really an old wooden village house under renovation. A laboratory is being built in one room so local growers can test sugar and acid levels. Today, the only public lab in the country is in Tbilisi (the big wine companies use their own). The marani is equipped with new stainless steel tanks for fermenting and storage, maintaining wine at a cool 9 to 12 degrees Celsius. Outside, a new cellar is being dug out to accommodate 33 kvevri (traditional terra cotta vessels for fermentation and storage), in addition to a storage room for some 15,000 bottles. Few small winemakers have the facilities to properly store wine and let it mature.

The vineyard is part grape plantation and part experimental nursery. When the Soviets industrialized Georgian wine production and other agriculture, they destroyed hundreds of its 525 indigenous grape varieties in the process. Barnovi hopes to resurrect local grapes like Danakharuli, Kapistoni and Kapnis Tsiteli, but he is also checking to see how well western grapes like Aladasturi and eastern grapes like Budeshuri Tsiteli take to the local climate and soil. He has built a “stratification camera” for grafting, which maintains a minimum humidity of 80 percent and a temperature between 25 and 30 degrees Celsius.

What started as a plan to help local wine growers has turned into a full-time, passion-driven occupation. “I only make it back to Tbilisi about twice a month. My wife is ready to divorce me,” Barnovi quipped.

Down in the marani, we were joined by Barnovi’s father, Vakhtang, a tall, strapping man, and Emzar Salkhinashvili, who pointed to his orb-like belly and said, “I’m not just a wine maker, I’m a wine drinker.” Barnovi filled our glasses with his first vintage of local Chinuri grapes with about 10 percent Goruli Mtsvane added, which fleshed out the vibrancy of the former with a fruity depth. Salkhinashvili, an expert in the vineyards, said that in the old days, they used to make sparkling wine with these two grapes together.

Vakhtang, a member of the Federation who makes an exquisite Tavkveri, pulled us over to a corner and in a hushed voice invited us to his house. “This wine is good, but mine is better,” he winked.